The Phantom of The Opera Slot

A story which has been depicted many times over the last couple of centuries, Netent’ slot is actually based on the Universal Studios 1920’s film of the same name. A film which forms part of the ‘Universal Monsters’ films.

You may recall that it’s not the first time that Netent have produced a branded slot with a vintage horror film theme; The Invincible Man Slot and also Dracula Slot were also based on Universal Monsters films. So let’s see what we can expect from this game:

How To Play Phantom of The Opera Slot

The Phantom of the Opera Slot is designed with 5 reels, 4 rows and a total 40 pay lines. The slot is suitable for all types of casino player as it can be spun from as little as 20p up to a whopping £200 per spin. As a nice touch, Phantom of The Opera offers a ‘win both ways’ pay line structure, which means that wins can be won from right to left and also left to right.

As you can imagine, Phantom of The Opera is set in an old theatre. It’s a dramatic setting for a dramatic story. Unfortunately, since this slot is not based on Andrew Lloyd Webbers ‘version’ don’t be too disappointed when you don’t hear the West End theme tune we all love. Still, as soundtracks go this one is quite fitting, offering a perfect mix of drama and suspense which only adds to the experience.

To get started, you’ll need to find a new slot site which offers the game. This shouldn’t be too hard, since most new slot sites utilise Netent software. If you get stuck for suggestions, you can see our latest new slot sites which do below this review.

The Phantom of The Opera Slot In Game Features & Free Spins

Any seasoned online slots player will tell you that when it comes to Netent slots, there are usually plenty of features packed into each game, and The Phantom of The Opera Slot is no different. Free Spins fans can certainly look forward to the free spins game, but this slot also has a few other surprises up its sleeve too:

Click & Pick Bonus Game: We have to admit that we love a slot with this type of feature, it just makes it all the more fun. The Click & Pick feature can be triggered when you land the double stacked Phantom symbol on reel 1 and also the double stacked Christine symbol on reel 5. There’s a maximum win of 7,200 coins at stake and this can be attained by the following 2 stages:

Make sure you’re aware that during the free spins feature, the Phantom symbol will also act as a Wild symbol, which can also become stacked for the remaining free spins game, so you’ll be able to make some large wins here. 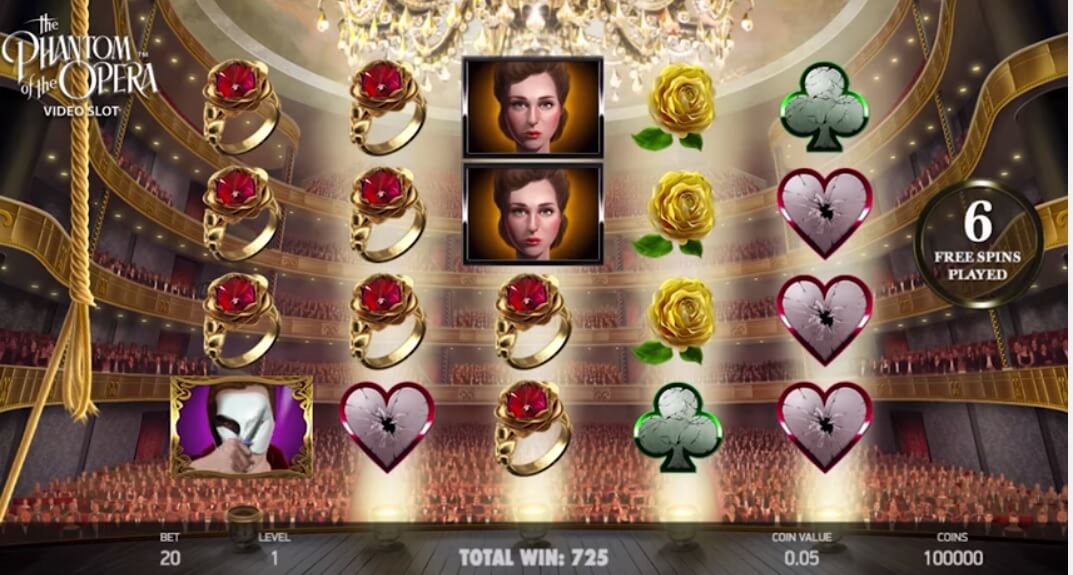 Phantom of The Opera Tips & RTP %

The Phantom of The Opera Slot offers an RTP % of 96.57% which we think is fairly average. Moreover, the game is considered a mid-variance slot. To get some decent wins, look out for the free spins feature which has potential wins of up to 800 times your total bet.

The Phantom of The Opera Slot is another branded game from NetEnt, which is the 3rd game of the “Universal Monsters” Trilogy. Our first thoughts is that the game lacks what we commonly associate with The Phantom of The Opera (or at least we commonly associate) which is the music theme tune and branding from West end/Broadway. However, if you want to see that then the twist is that it’s none other than Microgaming who has secured rights and is leasing that version in late 2017.

Netent has done this story some justice though; there’s enough features to go around, the graphics are impeccable and large wins can come within the fun and dramatic free spins feature. All in all, The Phantom of The Opera Slot is well worth a spin.

Where You Can Play The Phantom of The Opera Slot (Netent)