No. Don’t worry. The Conan slot is not based around that rather terrible film. Instead, the Conan video slot is based around the original comic book character. As with all ‘licensed’ slots from NetEnt, it plays into the source material rather well.

One of the best ‘themed’ games from NetEnt

The Conan slot looks stunning. Seriously. So much love has been poured into the look of this game. The symbols appear as if they have been pulled out of the mind of the original comic book writers. It gives you a hefty dose of nostalgia.  The sound design is awesome too. It plays into the ‘apocalyptic wasteland’ theme rather well. For the most part, it is nothing but the sound of a gust of win casually blowing. You would think that something like this would get annoying when listened to for more than a couple of minutes, but it doesn’t. The sound works well and, once again, really nails the whole Conan theme.

Since this is a NetEnt slot machine, it has been designed to be played on mobile devices right off the bat. It works ridiculously well too. Just load it up in your favourite mobile slot site and you can jump right in. The only issue is that some of the detail in the images can be a little bit blurred on the smaller screens, but we doubt that you are going to be that fussed about this.

There are six reels, three rows, and twenty-four pay lines. Like many of the more recent slots from NetEnt, Conan has a ‘pays both ways’ feature, which means more of an opportunity to win. You will need to spend a minimum of 20p per spin, up to a maximum of £200 per spin. The RTP is 96.28%. It is a medium volatility slot, with people reporting that they can score themselves a win every five spins or so. 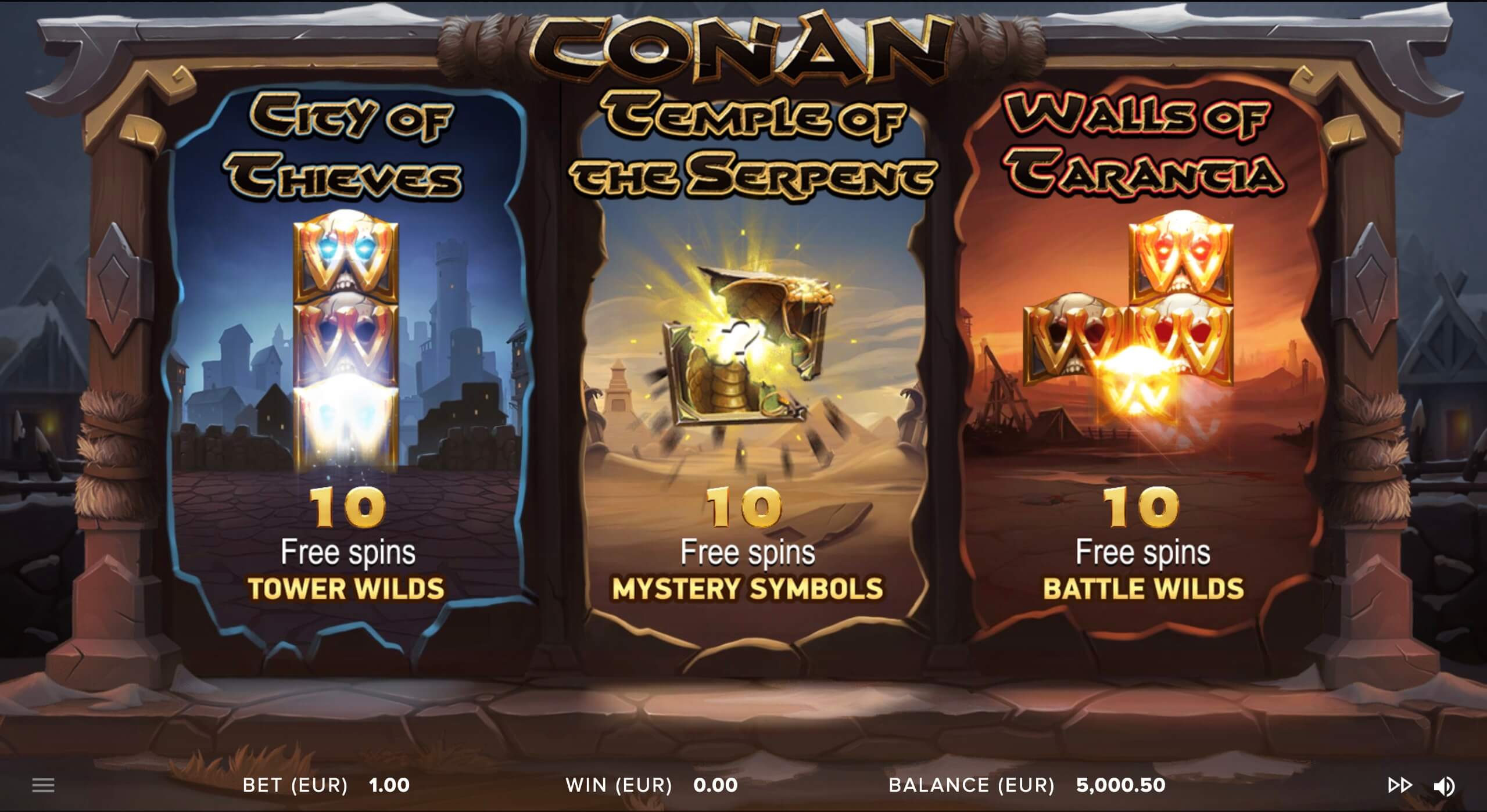 The Conan video slot machine from NetEnt is absolutely brimming with features. A lot of them are going to pop up fairly often too.

Each pair of reels will have a feature attached to it. These can appear at any time when you are playing the game. From what we can tell, you should have at least one appear every five to six spins, but this is just an average. Some people have gone dozens of spins without seeing a single one of these features pop up:

Tower Wilds: this is a blue tower. If it appears on either of the first two reels, it will expand to cover the rest of the reel.
Mystery Symbols: this can only appear on the 3rd and 4th reels. It is also one of the most lucrative if you are lucky enough for it to pop up. As the name suggests, this will turn into random symbols when it appears. On occasion, you may get a stacked set of symbols that are the same. If this happens, then Conan will appear and do battle with a snake, which will increase your multiplier.

Battle Wilds: this is a feature that can appear on the 5th and 6th reels. It is the only feature which can expand beyond these reels too. It is a wild which will expand sideways, which is great for scoring some of those ‘pay in any direction’ wins.

On top of this, there is also a ‘free spins’ feature where you can earn between 10 and 50 free spins dependent on the number of scatters you used to trigger the feature. You will have the option of one of three ‘modes’ to play here:

Absolutely. It is not the greatest slot NetEnt has ever released, but if you love top-grade graphics, a dramatic soundtrack and you love the Conan franchise it is worth giving it a bash. Just bear in mind that it doesn’t pay out that frequently, so you will be in it for the long haul. You can find Conan slot at the following trusted and licensed new slot sites in the UK.