Join favourite Vikings characters Ragnar, Lagertha, Bjorn and Floki during the brutal Viking period, where raids and wars are a frequent occurrence in this fantastic official Vikings slot by Netent. For those not familiar with the TV show, then the story is based on the Saga of Ragnar Roðbrók , who was a legendary king of Denmark and Sweden and was so famous that he made it into the Nordic Sagas.

I think we can all agree that Netent’s Vikings Slot is a slot that we’ve wanted to happen for a long time. Based on the critically acclaimed TV series from the History Channel & HBO, Netent have successfully pipped every other casino software provider to the post and secured the exclusive rights to make the official “Vikings Slot”.

For those who have seen the show, upon entering the game, you will feel right at home. A backdrop of dark, mountainous terrains, ravens and runes are abundant - it’s quite like the TV series. The official Vikings logo, made of metal and coated in blood mark the reels. Yep, we have to say that it’s done really, really well.

For those who haven’t seen any episodes, then take our word for it - you might be searching out season one as soon as you’ve finished playing. Netent’s Vikings Slot is designed with 5 to 7 reels and has a 243 ways to 78,125 ways to win configuration. Visually, it’s a great looking slot, but we do not expect anything less. Symbols on the reels include the main cast, as mentioned above, plus iconic Viking war shields, Runic symbols and regular lower paying symbols J,K,Q,A.

During the main game, Vikings slot is played on a “regular” 5×3 reel set up, but this is switched to a new and rather unique 7×5 design during the free spins feature or what is known as “raid spins”. This is how, during this feature, that there is an incredible 78,125 ways to win set up!

There are a few other features which are pretty fun and exciting in this game, notably the “Hotspot” feature. You’ll come across this feature in the main base game whereby reel 3 is illuminated by an electric current. When you land a stacked Viking symbol which will totally covers the 3rd reel, all of the other Viking symbols will transform into that particular symbol.

What’s really ace about this feature is that the Viking symbols don’t have to connect at all, but they are taken into consideration when wins are evaluated, so there’s definitely some scope for huge wins here.

There is also another feature called “Shield Wall Feature”. You can activate it both in the base game and also in the free spins feature. A cluster of 3×2 or 5×2 mystery shield symbols will appear on random areas on the reels. These shields will then reveal a high paying symbol to pay out a decent sum.

You will get 7 free spins when landing 3 scatter symbols on reels 3, 4 and also 5. During the “raid spins” as they known in this slot, the scatter symbols have been removed but don’t let that put you off as there’s decent scope for potential huge wins, especially with the 5×3, 243 ways to win. The reel set is changed to a setup of 7×5 (78,125 win ways) and the Hotspot reel now covers the three middle reels. 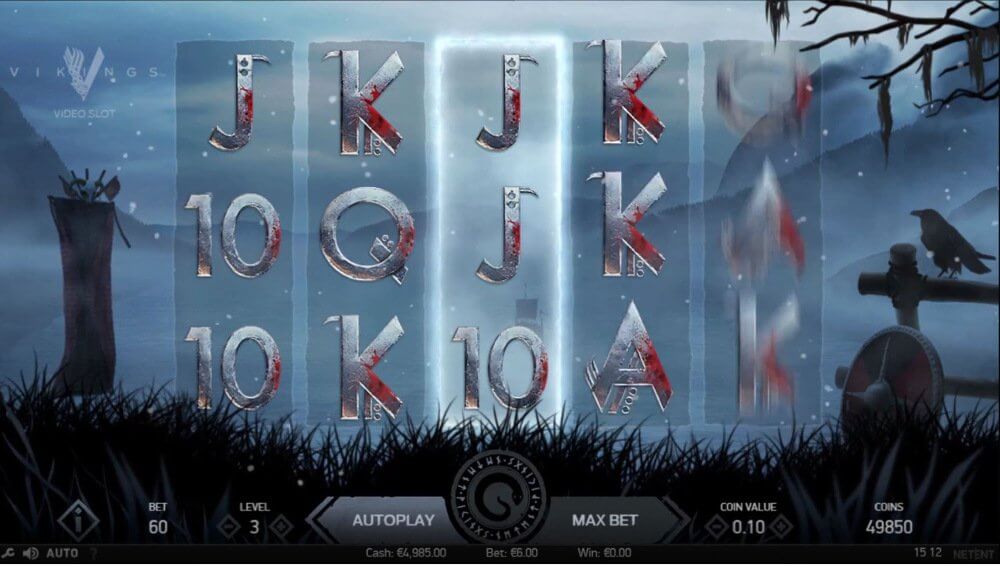 Vikings Slot has a 96.05% Rtp %, which is nothing spectacular, and a bit average and is medium variance. We’re thinking that Netent wanted this game to be accessible for all types of player, so this RTP%  and variance is to be expected. What’s more, as a playing tip, look out for the Raid Spins feature (read above) where you can win up to 10,000 times your stake!

Any Netent mobile slot needs no introduction, but those wishing to play Vikings Slot on mobile devices can do so really easily. The graphics are perfect on all mobile devices and you don’t miss any feature as above. This game is totally recommended for mobile players wanting the freedom of playing anywhere they please.

Perhaps we’re biased, since we’re huge fans of the TV series but we reckon this game will result in being one of Netent’s finest and most popular branded slots; and not just branded Netent slots either - it’s definitely up there with Microgaming’s “Game of Thrones slot”.

First of all, the graphics, as you would expect, are pretty amazing. There are plenty of in game features to keep you amused and in full suspense. There’s some pretty huge win potential too, especially in the Vikings free spins game. Plus, with an average RTP % and with medium variance this game is suited for all types.

All in all; Netent’s Vikings slot is highly recommended. You will be able to play this game at our recommended top slot sites below, check them out if you’re looking for a new casino welcome bonus to take advantage of!